Beer is an approachable and easygoing beverage, and there's a beer out there that pairs well with almost any food. This quick guide to beer basics, styles and pairings will make your life simpler.
This post may contain affiliate links. Please read my Disclosure Policy. 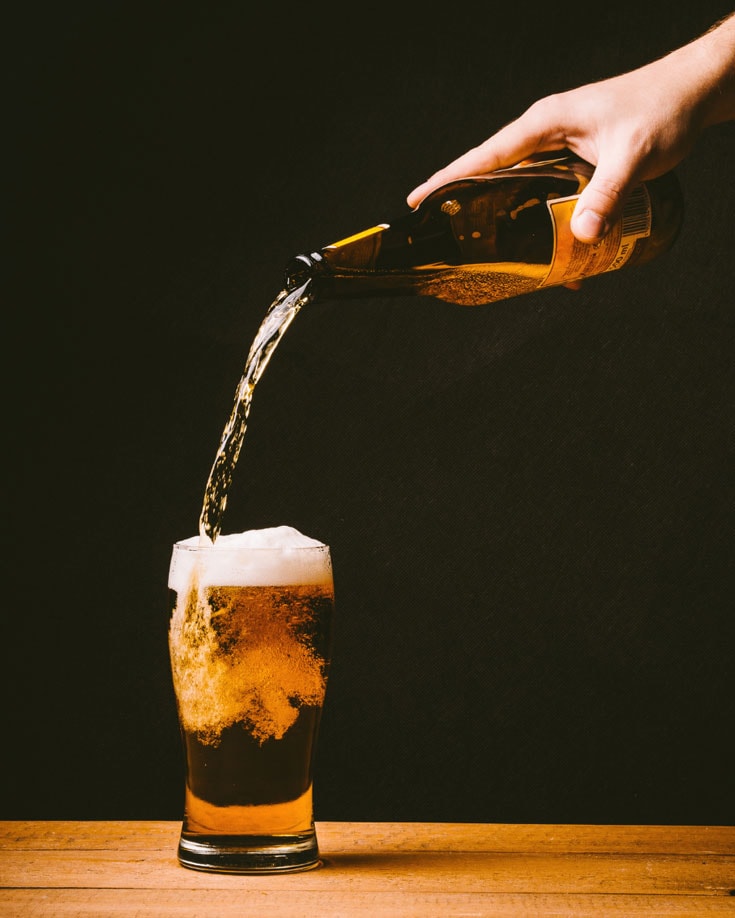 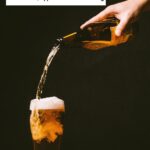 When did beer get so complicated? In the old days, you'd just buy a sixer of Bud or Miller Lite, and that was that. Maybe you had a weird friend who drank Guinness stout, black as coal. But now, everyone seems to have opinions on IPAs and Belgians, and local breweries and brewpubs are everywhere.

Don't fret: Beer is still the friendly, everyday drink of choice. But there are new friends at the party, which is great news for anyone who wants to enjoy beer with good food.

Beer has, traditionally, only four ingredients: water, malted barley, yeast and hops. But with these four ingredients, you can brew dozens of types of beers. Before Prohibition (1920-1933), there were hundreds of local breweries all over the United States, producing many different kinds of traditional beers that immigrants had brought over from Europe.

Prohibition destroyed these businesses, and even after repeal many restrictive laws remained, so only a few breweries were able to come back. These large concerns brewed only a few styles. The most popular was American lager, a variation of Pilsner, a light, easy-drinking beer originally from Pilsen, in now-Czechia. Budweiser, Miller, Coors, all the light-colored mass-produced beers are of this style. Basically from the 1930s through the 1980s, this one type of beer was all that was commonly available.

In 1978, Congress legalized brewing beer at home, and this small seed allowed an underground beer culture to flourish. From thousands of homebrewers, some decided to go professional. Fast-forward to today, and there are once again thousands of breweries delivering hundreds of beer styles to the lucky drinker. And to the lucky cook who can perfectly pair a tasty beer with pretty much any dish.

Of course, this beer proliferation can lead to confusion. Luckily beer is still pretty simple in that a few pieces of info can tell even the beginner what to expect.

Darker beer simply comes from barley that is roasted longer. Darker beers typically have more robust flavors, but are not necessarily heavier or higher in alcohol. So let's bust that myth that dark beers are scary and not good for beer beginners. Fun fact: a "half and half" is a layered English beer cocktail usually made with pale ale and a stout. The stout actually floats on top of the pale ale, since the it's lighter in both weight and alcohol, despite its inky appearance.

The alcohol by volume (ABV) in a beer is a good signal to look for, since beers with higher ABV typically feature stronger flavors and heavier textures. Alcohol in beer comes from the yeast consuming the sugars in the malted barley, so ABV is also often related to the "maltiness" or sweetness of the beer.

Hops are a type of flower added to beer to balance the natural sweetness of malted barley with bitterness and aroma. Hops also help preserve beer. The amount of hops in beer is often reported by the International Bitterness (or Bittering) Units (IBUs).

The higher the IBUs, typically the more bitter the beer (though some hops added late in the brewing process impart more aroma than bitterness). India pale ales (IPAs) are an example of a beer style where hops provide the dominant flavor.

Traditionally, other flavors in beer were introduced using different types of yeast, which can make a beer dry or frothy or slightly tart (or seriously sour). Different grains ― like wheat or rye or rice (used in Budweiser, for example) ― also add different flavors to beers.

Today, many types of beers have other added flavors, ranging from fruits like lime and apricots to peanut butter, to beer aged in wine or whiskey barrels to impart those flavors. Beer brewers have gone wild (maybe overboard) adding flavors to beers, so there is a variety to suit any palate.

American Lager and Other Light Styles

American lager is the style of most mass-produced beers. Light in color, low in alcohol, low in hops, low in malts (often rice is used to reduce flavor cost) and only lightly flavored, these may be more suited to college keg parties than a dinner prepared with care. However, many people are accustomed to these familiar beers, so when having a lot of guests over, particularly for a casual cookout, it can't hurt to have a couple of PBRs around to appease the less-adventurous guests.

A better choice for a light, easy-drinking beer suitable for grilling on a hot day would be a real Pilsner. Pilsners have more hops and malt flavor than an American lager, but not so much that it's intimidating.

A Mexican-style lager is also a good choice. These are light, crisp beers often brewed with a bit of corn (there is no strict definition for this type of beer, though they descended from Vienna lagers).

Other lighter beer styles to try would include a Kolsch or a Helles lager. These beers are great for relaxing summertime meals.

IPAs are hoppy beers that have become extremely popular and can be a good jumping-off point for more beer experimentation. IPAs tend to be light-colored and not very malty, but aggressively hopped. This means that IPAs are typically very aromatic and bitter, and could thus turn off beginners.

They were originally developed in England for troops stationed in India; by adding way more hops (and more alcohol) to pale ale, it could survive the hot, months-long trip to India in drinkable condition. But today's IPAs come in many different variations from light, citrusy hazy IPAs to highly alcoholic and boldly-flavored Imperial IPAs. IPAs stand up to spicy foods.

Belgians are a loose collection of beer styles from Belgium rather than a specific type. What they tend to have in common is a reliance on different yeast strains to provide fruity, spicy flavors (from esters and phenols produced by the yeast).

This is where beer really starts to get interesting, as Belgians range from light witbiers made with added wheat to dark, hearty (and highly alcoholic) dubbels, tripels and quadrupels made with double, triple and quadruple the traditional amounts of malt.

A good starter is a saison, which varies but is usually a light and highly carbonated "farmhouse" beer that highlight the flavors yeast can impart. Saisons pair with foods that might suggest white wines, like fish or chicken. Belgian blonde ales are slightly stronger, hoppier and maltier.

From there, one can pinwheel into a Belgian kaleidoscope of funky sours for sipping and fruity, sweet lambics suitable for dessert. Higher-end Belgian beers are often naturally carbonated with fermenting yeast ("bottle conditioned" in beer parlance, rather than blasted with CO2), so may have a harmless yeast residue at the bottom of the bottle.

Dark beers are another loose category of styles, but in this case, feature darkly roasted malts that impart toasty flavors that can range from coffee and chocolate to burnt toast. They tend to be less hoppy (though dark IPAs exist).

The classic Irish stout is a great example ― crisper and lighter than one might expect, but with a creamy head. An English or "milk" stout will have a slightly sweeter profile. Porter is usually a heartier very dark beer, often said to have gotten its name by sustaining the luggage carriers in English train stations.

German styles like Bocks and Dunkels are malty and not as black. Dark beers go with comfort food on a cool day. A pot of stew and a pint of porter on a dark winter evening... heavenly.

Even today, the beer market is highly concentrated, with only a few gigantic companies controlling the vast majority of beer production. So I highly recommend supporting your local craft brewery (or at least a smaller regional brewery). These beers will typically be better in every respect, and you can get styles that will mimic ― and likely beat ― your preferred mass-marketed suds.

Local craft brews are more expensive, but here's the beauty of beer: Even the priciest, high-end beer is relatively cheap compared to fancy wines or whiskeys. A six-pack of a super-yummy beer from a top-end brewery is only a few dollars more than something on sale at 7-11.

A fun afternoon can be spent at your local brewery tasting room, sampling small glasses of their offerings and learning about what they make and how. Or simply ask at your local bottle shop what interesting brew they recommend for an occasion.

Here in San Diego County, we have over 125 breweries (at the time of writing this), many with several locations. It is a top-notch craft beer scene and makes San Diego worth a visit for any serious beer lover.

Sample Pairings of Food and Beer

There are a few simple things to remember when pairing beers and food. First, you have to decide whether you want the beer to complement or contrast with the food. For example, a spicy Indian dish may suggest a contrasting light style (like a Pilsner) to cut the spiciness, or a spicy IPA to stand up to the heat of the food.

I suggest contrasting with strong flavors and complementing subtler ones.

Another aspect to consider is texture. Fatty foods like duck or a cheesy casserole might beg for something crisp or sharp to cut the oiliness, while a crunchy salad wants for a heavier Belgian to add heft.

If pairing multiple courses, or even just tasting multiple beers, it is best to go from light to heavy in flavor/texture/alcohol. If not sure, just go light to dark in color. This way, the subtle flavors in the lighter offerings aren't drowned out by the hearty ones.

But the last rule to remember is that there are no rules. Beer is freedom, its ancient and modern history full of rule-breakers and mavericks. Brewers have experimented for centuries with wild ideas. So take your cue and follow your own tastes.

Smoked Brisket is a hearty BBQ classic, and Delicious IPA ― from San Diego's large regional Stone Brewing ― is a great contrast. The smoky, fatty meat flavors are cut beautifully by the light, citrusy sharpness of the IPA. Delicious IPA is brighter in flavor than most IPAs, but also 7.7% ABV, so it definitely stands up to the hearty brisket.

Alternate beer: Since some people are IPA-averse, a crisp, tart Belgian like Societe's The Damsel is another great choice for brisket pairing.

Cedar plank salmon is simple and easy, with subtle flavors. So we want a beer that will complement the taste without getting in the way. Spezial Pils is a well-balanced beer with both hop and malt flavors that show up well but know their place.

Alternate beer: For something a tad heartier with the salmon, Karl Strauss Red Trolley Ale leans more on the malt side, but with an easy-going profile and a terrific copper color.

Fish tacos are a San Diego staple. Fresh fish and a dash of spice, cilantro and lime. You need a beer that screams fun-in-the-sun, and Thorn Brewing's easy-going Barrio lager is just right, light and drinkable.

Alternate beer: San Diego is also the home of the strongly hopped West Coast IPA. So if you really want to chow like a local, spice up the tacos with hot sauce, and spice up the beer with Ballast Point Sculpin IPA.