4 ingredient cinnamon-sugar air fryer donuts ready in less than 10 minutes and will satisfy that donut craving.
This post may contain affiliate links. Please read my Disclosure Policy.
Jump to Recipe 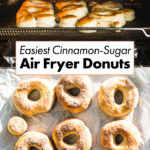 So you’ve got an air fryer and have a craving for donuts early in the morning (or late at night) and don’t want to run to the donut shop? Open that can of biscuits and get to donut making, because you will be eating some freshly air fried donuts in less than 10 minutes.

This is not the type of recipe I usually post. It’s a total cheater recipe but it totally works. These are definitely not from scratch donuts. They will , almost instantly satisfy that donut craving.

These are not the from scratch type of donut. In fact, they are made from canned biscuits. The texture is pretty close to a donut, but no, it’s not exactly the same.

You definitely won’t find me saying “OMG, these are THE BEST donuts.” Nope, they aren’t. I’ve never even made real donuts, probably because I’m too lazy. These donuts are, however, the easiest donuts you will ever make, I can promise you that. 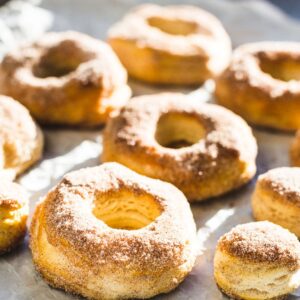