Light, airy, custardy and just so delicious. This is bread pudding perfection made with croissants and topped with an amazing bourbon-butter sauce.
This post may contain affiliate links. Please read my Disclosure Policy.
Jump to Recipe 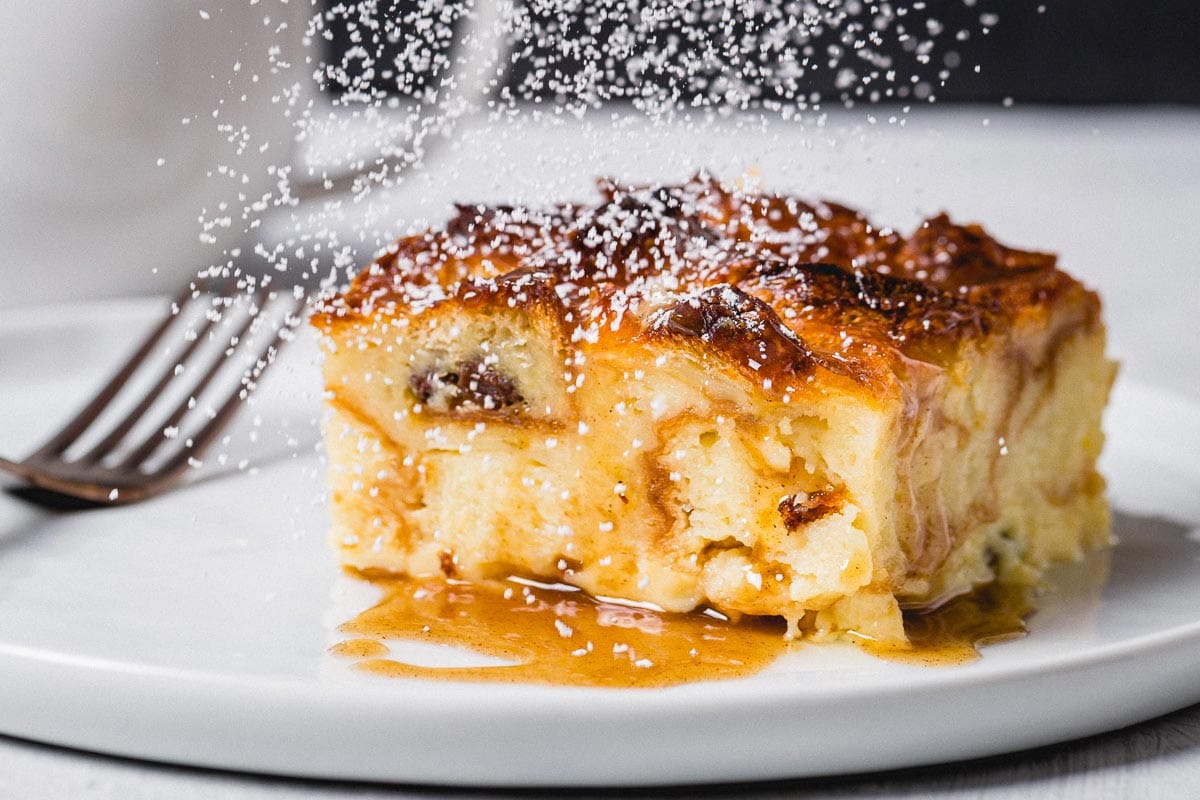 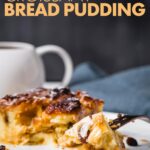 Bread pudding is an amazing thing. It combines croissants with custard for a creamy light luxurious texture that is beyond delicious. The best bread pudding that I've ever tasted (yep, it happens to be this recipe) uses croissants instead of brioche or other types of bread. Croissants are the secret to the lighter texture. If you prefer denser bread pudding, you can use brioche.

This is easily one of the more decadent desserts you will ever eat. I can't tell you how many times I've brought it to a party and people rave about how it is the best bread pudding they have ever had. If you love creme brulee and french toast, you are going to love bread pudding even more.

Croissants are already sort of a food group of their own, right? You can literally plan an entire vacation around croissants and never get tired of trying different versions. Sure, they aren't necessarily "healthy," but they are so light how could they really be that bad?

Adding bourbon-soaked raisins gives the bread pudding some nice bright acidity which adds a lot to balance everything out.

The texture of bread pudding is the most important part. When dense bread is used, the texture is often the same from top to bottom. It can be dense and not crunchy on top. That's not the case when you use croissants. The top of the bread pudding is crunchy and the inside is light and custardy.

For dessert, breakfast or both? When I make it, it's one of my favorite breakfasts. Combines croissants with french toast.

The ingredients are pretty basic and you just might have everything you need during the holidays: Croissants, eggs, heavy cream, whole milk, sugar, vanilla extract, raisins, and bourbon (or dark rum) for soaking the raisins, which is optional.

The bourbon butter sauce is made of bourbon, brown sugar, butter, heavy cream and cinnamon.

As wonderful as fancy croissants from the French bakery are; It's all about the Costco croissants when making this bread pudding. They are super cheap ($5.99 a dozen) and you only need about 6 of them for this recipe.

How to Make Croissant Bread Pudding

The concept of making bread pudding is quite simple. Add a custard base to bread and bake it until it's cooked through and golden on top. Here's how we go step-by-step to comletion.

Start off with 1 pound of croissants. Cube them and dry them out in a low temp oven.

It's key to dry out the croissants. And no, "stale" croissants are not the same as drying them in a low oven. When they are dried out, they will be much more like a sponge to soak up the luxurious custard.

Make the custard in a large bowl with the eggs, cream, milk, sugar and vanilla extract. Add the custard to the croissants and let it sit in the refrigerator for 2 hours to fully soak up the custard.

Bake the bread pudding at 350° F for about 45 minutes to 1 hour, or until it is cooked through and the until the top is puffed up and golden.

Let cool slightly before slicing and serving with the bourbon butter sauce.

Bread pudding is best served warm, but it can also be eaten cold. It's also a delicious treat to be enjoyed in the morning for breakfast with a cup of coffee.

As good as it is on its own, adding a sauce definitely kicks it up a few notches. For this bread pudding, we're pairing a delicious buttery bourbon sauce to drizzle over the top. It's made with dark brown sugar, butter, cream, bourbon and cinnamon to add some nice spice. The sauce can be made ahead and gently reheated when you are ready to serve it.

Other sauces that pair wonderfully are a spiced rum sauce, vanilla butter sauce, crème anglaise or fruit purees. You can even top it with ice cream.

How to reheat bread pudding?

One of the great things about bread pudding is how easily it re-heats. Simply microwave individual portions on high for 30 to 45 seconds, or until it is warmed through. It's best not to heat it up too much, so start with less time until you find the sweet spot.

Can you freeze bread pudding?

Can you add chocolate to this bread pudding? 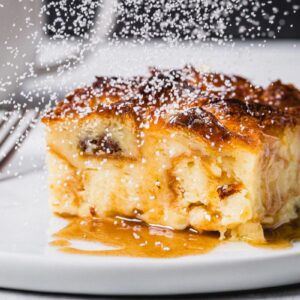 To make the bread pudding

To make the bourbon sauce