A quick weeknight meal that is ready in under 20 minutes. This recipe will even please the kiddos (and get them to eat super-healthy salmon). Be sure to make extra for lunch tomorrow. Pairs perfectly with jasmine rice and your favorite green veggies.
This post may contain affiliate links. Please read my Disclosure Policy.
Jump to Recipe 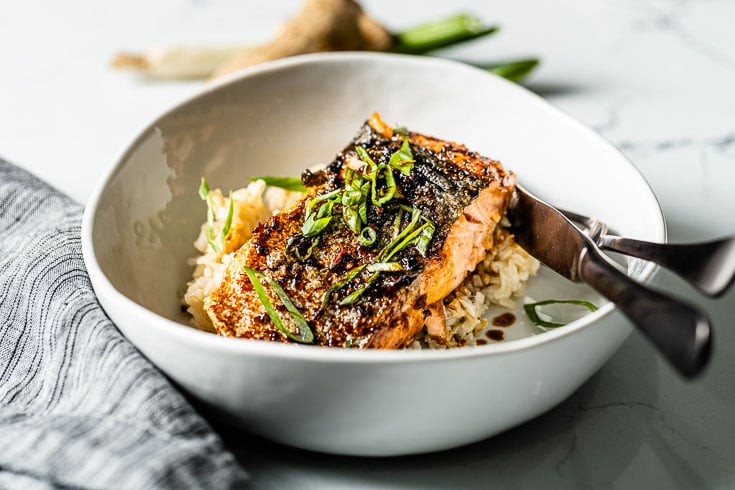 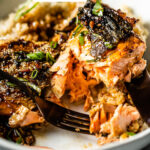 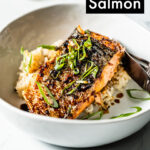 Whether it's fish or chicken or veggie, the wonderful, slightly sweet, salty umami flavor of a well-made teriyaki satisfies the taste buds in so many ways. Some clumsy teriyakis overpower the flavor of the main ingredient. But with succulent salmon -- or any high-quality protein or veggie -- you want a teriyaki that enhances and complements the flavor instead of masking it.

This easy teriyaki salmon recipe doesn't marinate the fish ahead of time, because the wonderful salmon has its own flavor that you don't want to cover up. The sauce simply complements it and adds wonderful umami flavors.

The salmon itself can be pan-seared, grilled or baked. But crispy salmon skin is something to love. That's why I will usually go with the pan-seared method for cooking the fish for teriyaki salmon.

High-quality Salmon - Wild Alaskan Coho was used in this post. Coho has a more mild flavor which is great for letting the teriyaki share the stage.
Tamari or Soy Sauce - Tamari is a Japanese soy sauce that is a little thicker, less salty and has a more balanced flavor than regular soy sauce. It's also gluten-free.
Brown Sugar - Can substitute honey.
Finely Chopped Garlic - While not traditional to Japanese cuisine, a little enhances the umami.
Fresh Grated Ginger - Adds that wonderful gingery flavor and a very subtle kick.
Toasted sesame oil - Adds a slight nuttiness to the sauce.
Cornstarch
Mirin - A subtly sweet Japanese rice cooking wine. Adds a slight acidity to balance the sauce. Traditional Hon mirin is about 14% alcohol, and shio mirin or shin mirin has little or no alcohol.
Garnish with sliced green onions

Where Does Teriyaki Come From?

The word "teriyaki" is actually a combination of two Japanese words; "teri" means glazed or glossy, and "yaki" means grilled or broiled. And teriyaki traditionally refers to the method of cooking rather than the sauce or dish itself. Teriyaki developed in 1600s in Japan, and came to the U.S. in the 1960s, first becoming popular in Hawaii. Fish is the customary ingredient in teriyaki, but other meats and even vegetables have really become popular.

How to Make Teriyaki Salmon

There are two main steps to making teriyaki salmon. The first is to cook the salmon, which you can do in your favorite method. Either pan-seared or baked are a great way to go, but it can also be grilled. The other main step ist o make the teriyaki sauce, which can be done while the salmon is cooking.

It's great to brush some of the teriyaki sauce onto the salmon during the cook. This creates a glaze around the salmon that helps the sauce stick to the outside.

Salmon teriyaki can also be baked in the oven. Yep, it's wonderful this way too! While you don't usually get crispy skin in the oven, baking salmon does avoid the potential mess that cooking in a hot skillet can make.

Simply season and bake the salmon at 400 degrees F until the internal temperature reaches 125 to 130 degrees F for medium or 140 for well done, about 10 to 14 minutes (depending on the size of the filets). You could even broil it for crispy skin, just be careful not to overcook.

Make it a Teriyaki Salmon Bowl

Salmon teriyaki is amazing in a nutritious and simple bowl with rice and quick stir-fried vegetables (especially bok choy), or even steamed veggies. Not only are these great for dinner, but you can make an extra for lunch tomorrow.

An exotic wild or forbidden rice, quinoa, couscous or other grains also make for a great teriyaki bowl.

What Goes with Salmon Teriyaki?

Rice is obvious, but then there are the veggies. The perfect sides for salmon teriyaki are usually bright green vegetable that is slightly crunchy. These veggies can be equally as delicious as the salmon with a drizzle of the teriyaki sauce on top. Sauteed Broccolini, steamed broccoli, green beans, stir-fried baby bok choy or even crispy roasted brussels sprouts are all wonderful sides for the salmon. 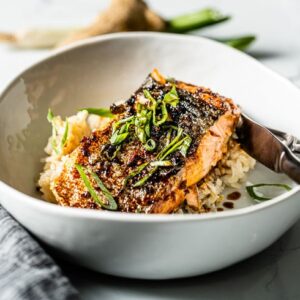 To cook the salmon

Make the teriyaki sauce while the salmon cooks

These are affiliate links where I might receive a commission if you make a purchase, at no additional cost to you. Thanks for your support!