The Whiskey Sour is a simple yet elegantly classic cocktail comprised of bourbon, lemon juice, simple syrup sugar, and an egg white. It's always a favorite - simple, tasty, and to the point.
This post may contain affiliate links. Please read my Disclosure Policy.
Jump to Recipe 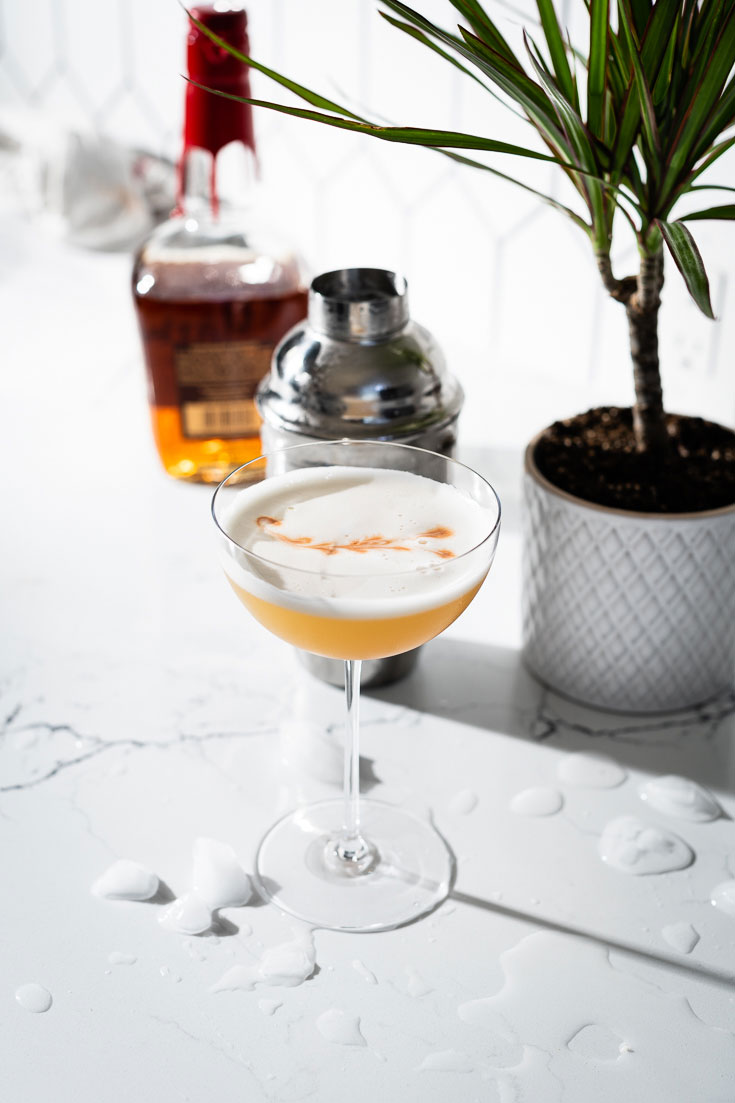 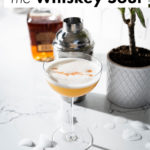 Easy to whip up and oh so delicious to imbibe. Guaranteed to get rave reviews any time it's served. It's one of those easy, comforting cocktails that works so well as the end of a busy day when little effort but big flavor are needed.

Not only is the whiskey sour a perfect cocktail to enjoy on a weeknight, in all seasons, it even works well served at special occasions. You get that tangy bite of lemon combined with the sweetness of simple syrup and frothiness of the egg white. It's one that never gets old, and can easily be riffed with other sprits.

A Little History of the Whiskey Sour

The whiskey sour is thought to have originated in the 1700s with English sailors ("limeys") mixing citrus with their on-board spirits; the rum version is usually called "grog". The first written record of the whiskey variant comes in the 1862 The Bartender’s Guide: How To Mix Drinks by Jerry Thomas. Others place the origin in Wisconsin or even Peru. Regardless of history, it's a simple cocktail that mixes a spirit, a sour, and a sweet.

What Makes a Drink a Sour?

A sour cocktail is made with fresh citrus juice, though you will see pre-made mixes out there. In this case, we're using fresh lemon juice. Sours typically have a base liquor, fresh citrus and a sweetener. Occasionally egg white is added to a sour drink to smooth it out and add that foaminess (often called the "Boston sour").

Variations use a splash of club soda or bit of champagne to lighten the cocktail. The mix of spirit, sour and sweet is so popular and pleasing there are endless variations, and can include muddled herbs or fruit or infusions. Common sour drinks are:

What Goes in it? (Ingredients)

There’s just four simple, fresh ingredients between you and the best whiskey sour recipe you’ve ever tried. Here’s what you need:

Why is There Egg White in a Whiskey Sour?

The egg white shaken up with all of the other ingredients gives the whiskey sour the foamy texture. Adding an egg white is optional, and there is definitely debate among bartenders, but I definitely recommend it. There's little reason to worry about using raw egg white, but pasteurized eggs are available if you prefer to be extra careful.

Alternatively, if you're vegan and have a love for frothy cocktails, you can substitute aquafaba (aka chickpea water) instead of the egg white. Aquafaba is a pretty amazing all-around egg-white substitute. ¾ ounce of aquafaba will equal 1 egg white.

How to Make It

Calories in a Whiskey Sour

Calories calculations in a whiskey sour can vary greatly, depending on the exact ingredients and measurement of ingredients used. Most of the calories in this drink come from the whiskey. There are about 64 calories in 1 ounce of whiskey, and this particular whiskey sour recipe has over a little over 200 calories.

Contains affiliate links where I will receive a small commission if you make a purchase, at no extra cost to you. Thanks for your support! 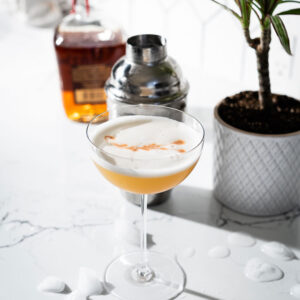 This post was originally published on September 11, 2019 and was last updated on November 9, 2020 to include updates and more useful information.