A super delicious and highly addictive appetizer or side dish that's ready in just 5 minutes. Once you have one, you will want the whole bowl to yourself.
This post may contain affiliate links. Please read my Disclosure Policy.
Jump to Recipe 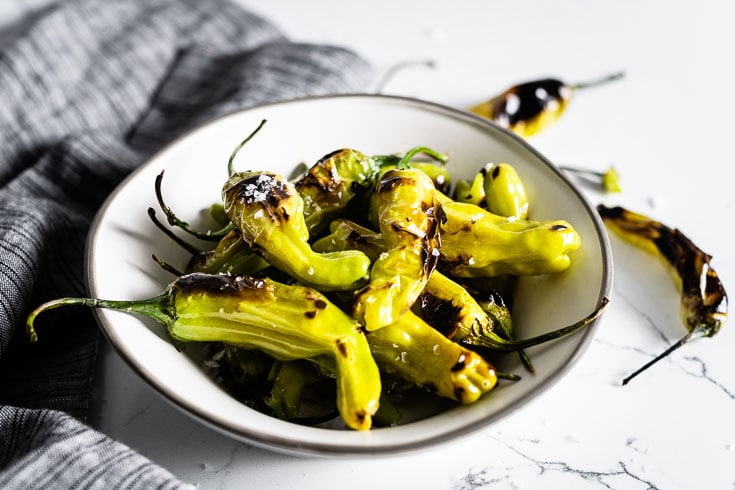 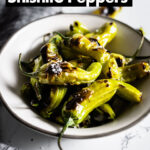 Shishitos are a dish best served blistered. They develop great flavors and you know they will be perfectly cooked with subtle smoky notes. If you have glanced at a restaurant menu lately, there's a good chance you have seen shishito peppers on the menu. Now it's time for you to make this super easy blistered shishito peppers recipe at home.

Ripping, roaring, piping... hot. This is what you need your skillet to be. Don't be afraid of burning these peppers. The skin protects them and browning them up is what adds extra flavor.

Shishito peppers are a mild-flavored chili pepper that originally comes from Japan, but are now grown all over. The young green version is thin-walled and about the size of a finger with peppery and sweet flavors. The peppers are usually harvested when they are young and green. They turn a beautiful vibrant red when they mature and their skin becomes thicker. They are best in summer months, but available all year long. The heat level in Scoville units ranges from 100 and 1,000.

I recently discovered red shishito peppers while shopping at Specialty Produce here in San Diego. It turns out the red versions are just mature shishitos. Could this be a hint into which ones are going to be slightly hotter?

1 in 10 shishito peppers are slightly spicy. But even those aren't really considered "hot" compared to many chile peppers.

Where to Buy Shishito Peppers

Shishito peppers are available at most grocery stores nowadays, including Trader Joes. If you are in San Diego, Specialty Produce always has an amazing selection of fresh Shishitos.

How to Cook Shishito Peppers

1. Lightly oil the dry peppers (you don't want any water on them at all) with some canola oil or other high-smoke-point oil.

2. Get your skillet smoking hot over high heat.

3. Carefully transfer the peppers into the ripping hot skillet and let them sit without stirring until they start to brown, then give them a stir to brown the other sides.

4. When they are dark brown in spots and softened, toss with coarse salt and serve.

While the best and easiest way to cook shishitos is in a skillet, you can also roast them in the oven, cook them on the grill, or even fry them up in an air fryer. I prefer to blister them in a skillet because of how fast it heats up and the direct contact with the heat that helps them blister the fastest.

Since you probably want to make these all the time, it's nice to have a little variety you can add to the mix. The cooking process will remain the same. First sauté the peppers to blister them, then you can toss them with any of the following ideas.

Sesame Oil & Sesame Seeds - Simply drizzle on a little sesame oil and toasted sesame seeds and toss at the end.
Togarashi - Sprinkle on some of this Japanese spice blend that includes red chili pepper, orange peel, sesame seeds, Japanese pepper, ginger and seaweed.
Sriracha Sauce - Place a little Sriracha Sauce or Sriracha mayo in a ramekin on your serving platter to dip the shishitos in.
Flaky Salt - This is a standard. I like to use a combination of Molden Salt and Diamond kosher salt because of the larger flaky Molden crystals can slide off the slippery peppers leaving them tasting unseasoned. Molden even makes a smoked version of their salt, which will be great with the shishitos. 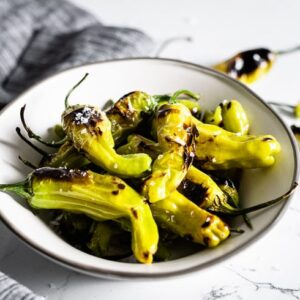