How to Cook Duck Breasts

The foolproof method for perfectly pan searing duck breasts with that wonderful crispy skin lies in the simple 80/20 rule.
This post may contain affiliate links. Please read my Disclosure Policy.
Jump to Recipe 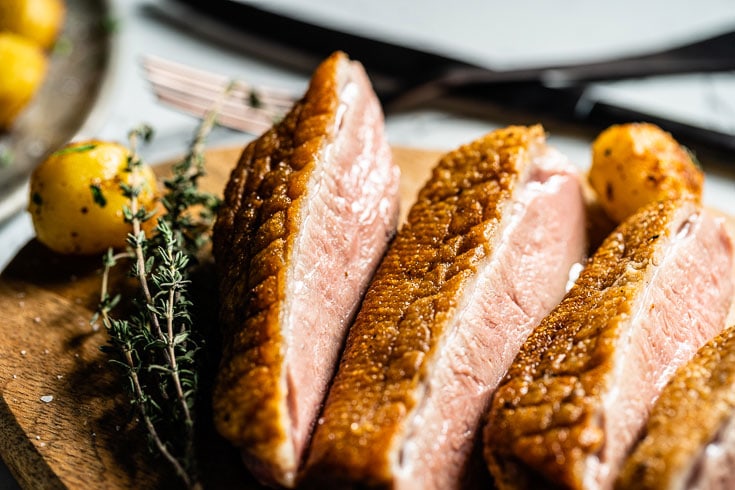 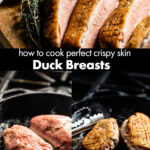 Duck breasts are one of the more magical proteins anywhere. Its distinctive fat content is unlike any other meat, in that it provides so much of the flavor (and is a healthy choice compared to other animal fats). If I see duck on a menu, I usually can't help but to order it. It's not often that you hear about people cooking duck breasts at home, and that's really a shame.

When was the last time someone told you that duck was on the menu when they invited you over? Probably never, and I dare you to try making it for some friends so they can taste what they have been missing out on.

A common misconception is that duck is super fatty. Ok, it's not really a misconception. As semi-aquatic creatures, ducks have a thick layer of subcutaneous fat to help them float and protect them from cold water. But once the meat is done cooking, there shouldn't be much of the fat left. The key is slowly rendering that fat down until it gets super crispy, while not overcooking the breast.

Duck might seem like a holiday protein, but it really is fantastic for every season. It pairs wonderfully with fruits, and whatever is in season is what you should go with. Examples include strawberries in spring, cherries in early summer, peaches in late summer, and apples or cranberries in fall.

One of my favorite dishes of all time is crispy skin duck breasts with duck fat potatoes, a port sauce, with maybe some figs cooked in the port. The pairing is out of this world.

There are 3 main types of duck that you will see available for sale.

While the flavors and sizes of the duck breast might vary, the technique for perfectly cooking them will be the same.

Those white ones you think of on a farm are called Pekin ducks, or "Long Island" ducks. They were first imported from Peking (now Beijing), China in the 1870s, where they had been domesticated for thousands of years. They are descended from and related to the common Mallard, and were initially farmed heavily on Long Island. The meat is lighter in color and more delicate in flavor than the other commonly available ducks. So if you're hesitant, Pekin might be a good duck to try.

The Muscovy duck is native to warm climes of North and South America (not Moscow, as the name implies), and was domesticated by Native Americans prior to the arrival of Europeans. Also called Barbary duck, the meat is darker, less fatty, and more strongly flavored than the Pekin. Muscovy is often compared more to beef than fowl, but can have gamey notes.

The Moulard, or Mulard ("mule duck") is a hybrid of female Pekins and male Muscovys. They are commonly raised for foie gras as well as meat, and the flesh is dark and strongly flavored like a Muscovy, but with a bigger fat layer like a Pekin. The breast meat is often called Magret, and can be a bit tough, though it is considered a specialty.

Where to Buy Duck Breasts

Duck breasts by themselves can sometimes be difficult to source locally. It's better to buy fresh, but whole ducks are much more available in the frozen section of your grocery store. Ducks have the same anatomy as chickens, so if you are comfortable breaking down a chicken, get a whole duck.

It is nice to be able to pick up just the breast and they are available from:

A Note on Temperature

Duck breasts are best-served medium-rare, in my opinion. The FDA and USDA recommend cooking to 165 degrees, which will be more medium-well. But most chefs agree that a lower temp is better, and since duck is not a common carrier of food-borne illness (since it is not usually mass-produced), the perfect plate is worth the slight risk.

I prefer to cook the duck breasts to a temperature between 125° and 130°F for medium-rare. If you are a food-safety stickler, maybe the higher temp is for you. But know that there are a lot of other, more-likely ways for pathogens in your kitchen to make you ill than medium-rare duck.

It is important to score the thick skin of the duck breasts to properly render the fat and encourage crispy skin.

To score the skin, use a sharp long knife and very carefully slice a ½" crosshatch diamond pattern, being careful to only slice the skin and not the flesh of the breast. It is easiest to slice the fat when the breasts are cold and dry.

How to Cook Duck Breasts (The Foolproof Method)

Precision is important when it comes to cooking duck breasts. Too cooked and they become tough and dry. Undercooked and they are chewy. And there's also getting the fat rendered off and crisping the skin without overcooking the meat. Seems like it might be difficult to do, but it's not!

This is the foolproof method to perfectly cooked duck breasts.

It's the 80/20 rule (but closer to 90/10). The breasts are cooked at least 80% off the time on the skin/fat side at a low temperature. Once the fat is rendered and the skin is crispy, the breasts are turned over and cook for just a few minutes on the meat side. That's it!

Sides that Go Well with Duck

Wine to Pair with Duck

With a strong flavor and a high-fat content, a wine with a sharpness or acidity will balance the duck. Pinot Noir is a great pairing. And be sure to consider the sauce and sides you choose as well. 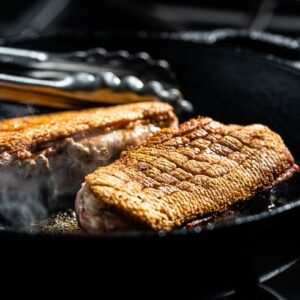