Home » Recipes » How to Cook Bacon in the Oven

Step by step to perfectly crispy baked bacon from oven to your plate in under 25 minutes. Just enough time to make coffee and the rest of your Sunday breakfast.
This post may contain affiliate links. Please read my Disclosure Policy.
Jump to Recipe 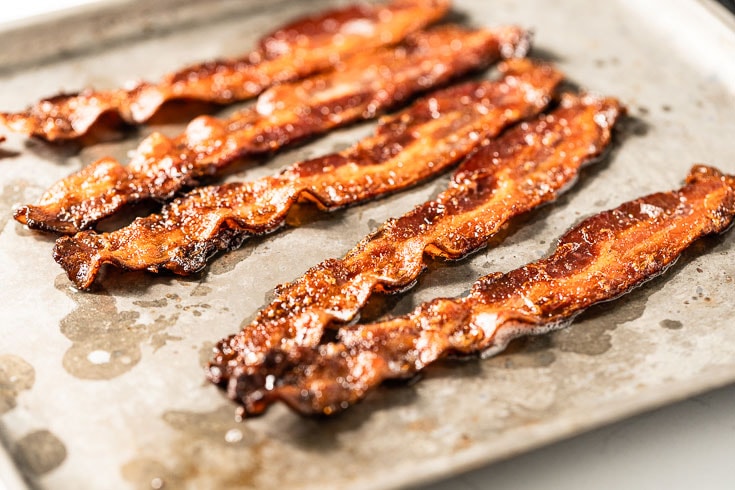 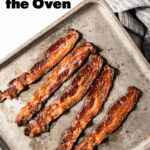 Crispy, crunchy, chewy, salty, smoky, a hint of sweet and just amazing. These are all words that describe our favorite ingredient that sounds good no matter what time of day it is. There isn’t a pork-eating human who doesn’t love perfectly cooked bacon. Heck, I even know a few vegetarians who can’t help but indulge in bacon on special occasions.

Some of us like our bacon soft and chewy, some like it burned to a crisp, and others (like me), like it perfectly crisp while still slightly chewy and tender. This is all easily achievable when you cook bacon in the oven.

There’s no doubt that the best way to cook bacon is in the oven. Once you try it, I’m sure you will also be convinced. Baking the bacon also gives you the opportunity to fine tune the bacon to your preferred texture and crispness.

Let’s dig a little deeper into the topic of bacon and go step-by-step for how to make perfect bacon every single time.

There are two main methods for cooking bacon: The pan or the oven. There are also a few alternative methods that are used, and those include cooking the bacon in the microwave and on the grill.

Is there a clear winner? If not, here’s a hint: The best method is cooking bacon in the oven, which is what I choose to do every time.

The Benefits of Cooking Bacon in the Oven

Now that you are on board with baking bacon in the oven, let’s talk about a few of the options.

Directly on the foil vs on a cooling rack
Cooking the bacon directly on an aluminum foil-lined baking sheet versus on a cooling rack results in slightly different bacon outcomes. When cooking on foil, the bacon will render in its own fat. This will make it cook more quickly and stay flatter, but you will likely need to flip the bacon. Coking on a cooling rack will evenly cook the bacon because the hot air can circulate all the way around it, which will also cause it to curl slightly on the edges.

The big deciding factor (for me at least) is the clean-up. That’s where aluminum foil takes the win again. Cleaning a cooling rack that has had bacon cooked on it is quite a miserable and long process so I will avoid it for that single reason.

Top 9 Tips for Cooking Bacon in the Oven

It is bacon after all, so let’s do it right!

What Kind of Bacon to Buy

There are so many options out there when it comes to buying bacon. It can feel really confusing when all you want to buy is some dang good bacon, right? Smoked, double-smoked, thick-cut, thin cut and just about everything in between. The simple answer: Buy thick-sliced and applewood smoked bacon.

I don’t know about you, but for me, there’s just something about unwrapping bacon that is wrapped in butcher paper rather than being sealed up in a vacuum-sealed plastic. Butcher paper just makes it seem like it will taste better. That’s definitely not to say that high-quality bacon can’t come from a package.

Where to Source High-Quality Bacon

Your local butcher might be the best place to shop for bacon. I also love the smoked bacon available at the meat counter at both Sprouts Farmers Market and Whole Foods. If you prefer to have high-quality bacon delivered to your doorstep (who doesn’t?), then check out Butcher Box (affiliate) for pasture-raised and heritage-breed bacon.

Cooking or baking bacon in the oven is really simple and will feel foolproof once you have done it.

Note that oven heating times are different so the actual cooking time will depend on your oven and how you like your bacon cooked.

Temperature for Baking Bacon in the Oven

400 degrees Fahrenheit / 204 degrees Celsius is the best temperature for cooking bacon in the oven.

How Long to Cook Bacon in the Oven

Typical thick-sliced bacon baking on an aluminum foil-lined baking sheet will take 15 to 25 minutes at 400 degrees Fahrenheit. There are a lot of factors that determine this, including the oven pre-heat time, the thickness of the bacon, your specific oven and how crisp you like your bacon.
Tip: Using the convection setting on your oven will bake the bacon more quickly and evenly by circulating the hot air around the oven making it even more perfectly crispy.

6 Things To Do with Leftover Bacon Grease

Good for you for saving that leftover bacon grease for another use (as long as it wasn’t burned). It will store in an airtight container in the refrigerator for about 6 months or a year in the freezer (probably longer, but just use it) and there are so many uses for it. Bacon grease has a smoke point around 325 degrees F, which is comparable to extra virgin olive oil. That makes it great for:

If you do need it to discard the bacon grease, pour it into a disposable metal container and let it cool completely to solidify before throwing it away. Never put bacon grease down the drain.

Want to Make Your Own Smoked Bacon?

Buying bacon is great, but if you are really ready to kick it up, then you can pick up a slab of pork belly and make your own smoked pork belly bacon. It’s surprisingly super easy and oh so satisfying.

Tools & Equipment Used to Make Bacon in the Oven 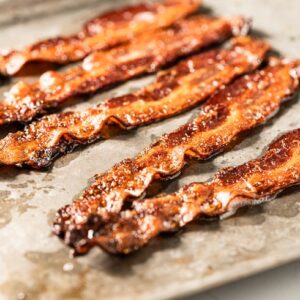 This post was originally published on Apr 8, 2018 and was last updated on May 14, 2019 to include useful content updates.