The pork is smoky, juicy and oh so tender. The glaze is sweet and tangy. The bacon is...bacon.
This post may contain affiliate links. Please read my Disclosure Policy.
Jump to Recipe 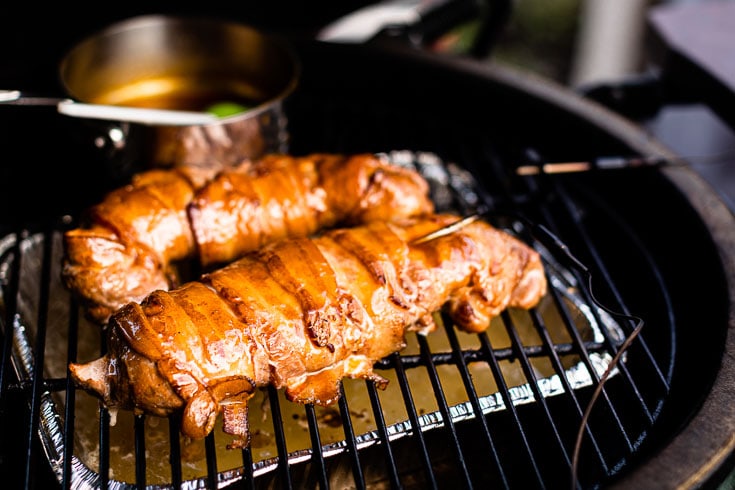 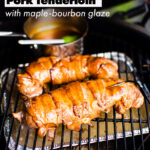 The star of this dish is the tenderloin and not the bacon, for once. But it is still crucial, insulating the delicate pork and keeping it from drying out. This is why I don't bother brining the tenderloin before smoking it, like I normally would. This makes me wonder why we don't just bacon-wrap everything. Hmm...

This is going to be delicious, so you might as well cook 2 pork tenderloins at a time for the same effort as one. Since they usually come in a 2-pack, it's great to just cook both and use the leftovers for pork sandwiches.

While you can do bacon-wrapped pork tenderloin in the oven, the smoker is key because it's all about the smoke flavor and keeping the pork super juicy and tender. Pork tenderloin can dry out easily if not prepared carefully, as it is naturally very lean muscle.

Tip: While smoking/cooking at a lower temperature like this (250° F), the bacon won't become super crispy on its own, and it's my preference to keep it that way. I personally don't want crispy bacon around the tender pork which would distract from the tenderness of the pork.

If you do want to get the bacon crispy, you can turn up the heat of the smoker towards the end, and continue to cook it until the internal temperature reaches 165° F. However, my preference and opinion is that the optimal finished temperature for pork tenderloin is 145° F.

I use applewood chunks for this recipe, as the apple smoke isn't overpowering. But any relatively mild wood will do nicely. I also rub the pork with salt & pepper, but you can use your favorite pork rub, if you feel like it won't distract too much from the flavors of the bacon or glaze.

If you don't have a smoker, you can totally use another method to cook the pork using the same basic technique.

On the Grill: The grill is a great tool for pork tenderloin. You can optionally grill these over direct heat to crisp up the bacon for a few minutes per side, then move them over to the indirect heat side and continue to cook following this recipe.

In the Oven: Slow roasting the bacon-wrapped tenderloins in the oven is a great option if you don't have access to a smoker or the grill. Simply roast it on a cooling rack on top of a foil-lined sheet pan. It won't get the same smoky flavors as cooking with live fire, so be sure to use smoked bacon which will give it some.

The only time I ever recommend thinly sliced bacon is when it's wrapping something and isn't going to be hitting a heat source directly. In this case, the thinner stuff works great for wrapping the pork tenderloin.

To wrap the tenderloin: Simply lay 5 strips of bacon out, place a seasoned tenderloin on top and begin rolling. There's no need to pin/fasten the bacon. It will stay in place if you are delicate and use your hands to transfer the meat to the smoker. If you prefer, you can secure the bacon to the meat using toothpicks. It's usually not necessary to do this since each piece of bacon can wrap about 1 ½ times around the tenderloins.

The glaze is totally optional, BTW, but adds a wonderful sweet tanginess to the smoky pork. The first few times I bacon-wrapped smoked pork tenderloin, I didn't add a glaze, but now that I have, there's no going back. The ingredients in the glaze are maple syrup, bourbon, apple cider vinegar, Dijon mustard and a little butter.

You can substitute honey for the maple syrup, if you prefer the taste. The honey is naturally thicker, so will take less time to come together in the saucepan. Even if you are missing all of the ingredients except for maple syrup or honey, you could simply brush those on the pork for a nice effect. 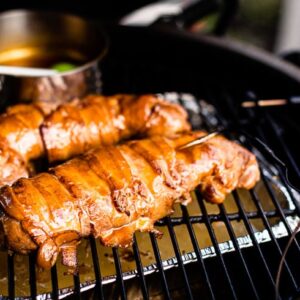 Contains affiliate links where I might receive a commission if you make a purchase, at no additional cost to you. This helps support this site so I can continue to create new content.