Copper River Salmon: from Alaska to our Dinner Plates

A Journey to the Copper River Salmon for Summer Salmon Camp. Where the best salmon in the world comes from.
This post may contain affiliate links. Please read my Disclosure Policy. 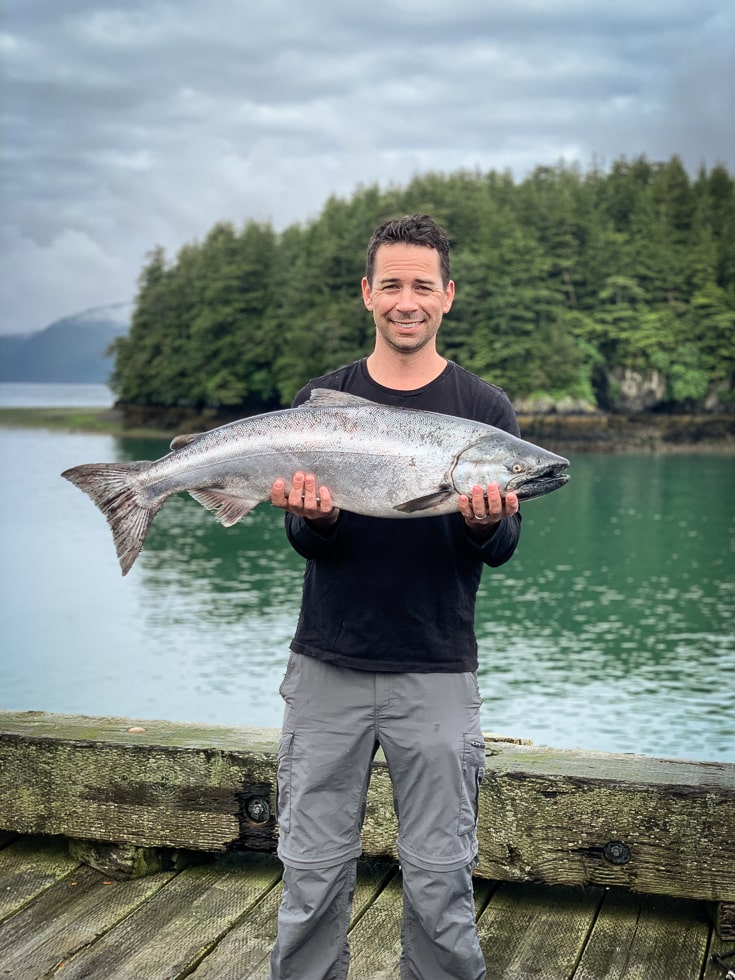 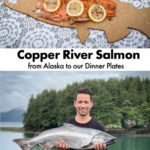 I recently had the pleasure of being invited to experience Cordova, Alaska and learn all about the pristine Copper River Fishery during Summer Salmon Camp. Cordova is a small fishing community in remote Alaska that is the source of some of the finest salmon in the world. I made the trip north, taking 3 flights and a few thousand miles over 4 states and 2 countries from San Diego, California.

Wild Salmon is one of my absolute favorite ingredients, so I can’t tell you how excited I was for this amazing opportunity of a lifetime to visit Alaska to see where it comes from. One of the first noticeable things that is right in your face even before you land, is all the natural beauty and breadth of Alaska. It is just unending. The sheer scale of the mountains and landscape creates an illusion of close proximity, yet they are really far and tall.

Cordova is a very small remote community that supplies the rest of us with one of the first wild salmon runs of the year and probably the best salmon found anywhere. Cordova’s population is just 2,239 during the summer months and drops down to much less than half of that during the Alaskan winter.

Traveling all the way up from the southernmost part of the U.S. west coast only seems appropriate when visiting Copper River Salmon, as the salmon themselves travel thousands of miles during their life cycle.

The story of the wild salmon is definitely one worth learning about because almost all of us indulge in it without ever knowing where it comes from or who catches it. Not only with the salmon's life, but about the fishermen and fisherwomen who dedicate their lives to catching them. Seafood usually just appears on our plates or in our shopping carts and that’s often as much as we think about it at the time. While everyone might not get to experience this pristine fishery first hand; we all get to enjoy its benefits on our dinner plates.

Learning about the Copper River Salmon and the area the fish are born and fished in was absolutely fascinating and I hope you enjoy hearing a little about some of the highlights and photos. Maybe you will be able to share with your family and friends the next time you have salmon on the dinner table.

The Life Cycle of the Copper River Salmon

From the Copper River to the Gulf of Alaska and back to the exact Copper River tributary where they were born. These salmon swim in the most pristine waters anywhere in the world. When they are caught, they are carefully handled every step of the way until they reach you at your local fish market.

Copper River Salmon are an example of Mother Nature at her very best.

These special Salmon are one of the most fascinating animals that I have ever learned about. Their life cycle is quite complex, and the specifics depend on the exact species, so I’ll give you just a very brief overview.

They start their life hundreds of miles up the Copper River where they are born in shallow streams. Salmon are anadromous, meaning they have the ability to live both in freshwater and saltwater. As they grow bigger and stronger, they make their way down the river and out into the Gulf of Alaska where they feed and mature for 1 to 4 years. Once they reach maturity, they fatten up and return to the Copper River to swim upstream to spawn and die in the same stream they were born.

They stop eating as soon as they enter freshwater. During their arduous fight back up the Copper River, their bodies transform and they are often called "zombie fish." They change color as they are able to absorb and consume their own skin for energy. It is absolutely fascinating.

When the salmon die, they give life to hundreds of other animals who eat them and then pass those nutrients to trees and plants. The Copper River Salmon are a perfect example of Mother Nature at her very best.

Copper River Salmon are only fished when they fully mature and return to the mouth of the river. They are fished by a very small fleet of fishermen who often pass the trade down from generation to generation.

Fishing days are determined based off of Meticulous counts by the Alaska Department of Fish and Game. They make the call on how many hours they can fish on a given day. Fishing days might be on Monday and Thursday, and range from 12 to 36 hours at a time, depending on the amount of fish that were counted the day before.

While Copper River Salmon is available year-round, it is only available fresh from about May through September, and the specific type of Salmon depends on which month they are running. King Salmon are harvested during May and June; Sockeye from May through July; and Coho are last from around August to September. The rest of the year it is available frozen, depending on supplies.

A Little about the Sustainability of Copper River Salmon

This Prince William Sound / Copper River fishery is very healthy, especially this year. It is highly regulated through a system of sophisticated fish counting using high-tech sonar. There are only a certain number of fishing licenses available. The licenses can be sold and bought, but that is the only way to get one. This keeps the fishing fleet to a size that helps ensure sustainability to avoid overfishing.

The biggest threat to wild salmon in Alaska

While there are numerous threats to other salmon fisheries along the west coast of the United States; the biggest threat to salmon in Alaska is rising ocean temperatures. They feed in the cold waters and as temperatures rise, they must swim further to reach their food source. This also means that they must swim back further to reach their spawning grounds after they have bulked up, burning off more energy before they reach the river.

The Journey to your table

These beautiful fish are caught, processed and flown out of Cordova the very same day in order to arrive as fresh as possible. The very same airplane that I flew on was also filled with boxes of cold packed fresh salmon heading to Anchorage where it is then routed to a city near you.

The Community of Cordova

The community of Cordova revolves around the Salmon. If the Salmon didn’t exist, the people of Cordova wouldn’t be able to survive. It's a place where everyone helps each other and the only reason you lock your doors is to keep the bears out of your house.

Gill nets are used to catch the salmon and the size of the holes in the nets determines which species of salmon they are fishing. It was fascinating to learn that a majority of the boats are captained and run by solo fishermen or fisherwomen. While some do take on a deckhand, most go out and catch fish on their own. They might be on the boat by themselves, but they are always looking out for each other as a strong community out on the water.

The long summer Alaskan days and tides that fluctuate almost 15 feet mean that you have to head out to fish at the right time of day, or risk getting stuck.

Tenders are scattered throughout the fishing grounds to pick up the catch from the boats and bring it back for processing.

Our gracious Summer Salmon Camp hosts, Annalee and Christa from the Copper River Marketing Association toured us all around Cordova and filled us in on all the details of how the entire salmon ecosystem works.

Our small group of 6 included 3 Chef/Restauranteurs from Denver, a writer from San Diego and a fellow food blogger from Portland.

Highlights from the trip

A tour from the sky - Seaplane flight over the Delta to view the fishing fleet when they arewereactively fishing.

Hiking to a glacier. What a WOW moment to see the unreal teal blue glacial ice in person is something everyone should try to experience. It was truly breathtaking.

Fileting a Salmon on the dock with a seasoned fisherman.

Cooking a salmon feast for fishermen. We had the opportunity to cook the fish we had just cleaned on the dock, for some of the fishermen who caught them.

A picnic on the Copper River

An afternoon on the Copper River. What an experience to be on the actual Copper River. The water moves swiftly, the cold chill in the air and the water as cold as the glacier that is just a few miles upriver.

Net mending
Hand made nets to the fisherman’s specifications. Based on color. Nets are a fascinating thing. Would you ever think that the fishermen are so picky about their individual nets that they choose the specific colors to use to best attract the salmon. Yep, it’s true. And they are all made by hand.

We ate salmon...and then we ate more salmon. Baked, seared, hot smoked, cured. You name it, we tried it.

The summer solstice means it really doesn't get dark. The sun would set for just a few minutes before it started rising again. The light wasn’t so much an issue for sleeping, but it was the mental feeling of not being ready to go to sleep because it is still light out. Something we definitely get to experience closer to the equator.

A 15-course tasting dinner at The Orca Adventure Lodge's New England Cafe. We weren’t hungry after eating a late lunch on the river. We were told that it would be a light 3-course dinner. We were definitely told wrong (but in the best way possible). The chef went all out for us and it was so much delicious fun.

Japanese Fish Printing (Gyotaku). An unexpected super fun take-home art project for a souvenir of the trip. We used a natural die to paint the fish and make an imprint on a tea cloth.

Where to buy Copper River Salmon

While wild salmon is a very seasonal fish, it is often available at larger stores like Whole Foods or even at Costco. Visit the Where to Buy section of the Copper River Salmon website to find out where you can buy it directly from fishermen and distributors.

You have come this far, and now here’s some recipe inspiration to keep it going:

Thank you so much to the Copper River / Prince William Sound Marketing Association for hosting me in Cordova, Alaska to experience your wonderful community and learn all about the Copper River Salmon.