This is the method you need to get comfortable with to become a master of the grill. Once you realize how simple grilling with two zones is, it is freeing and brings out the best in your grilling.
This post may contain affiliate links. Please read my Disclosure Policy. 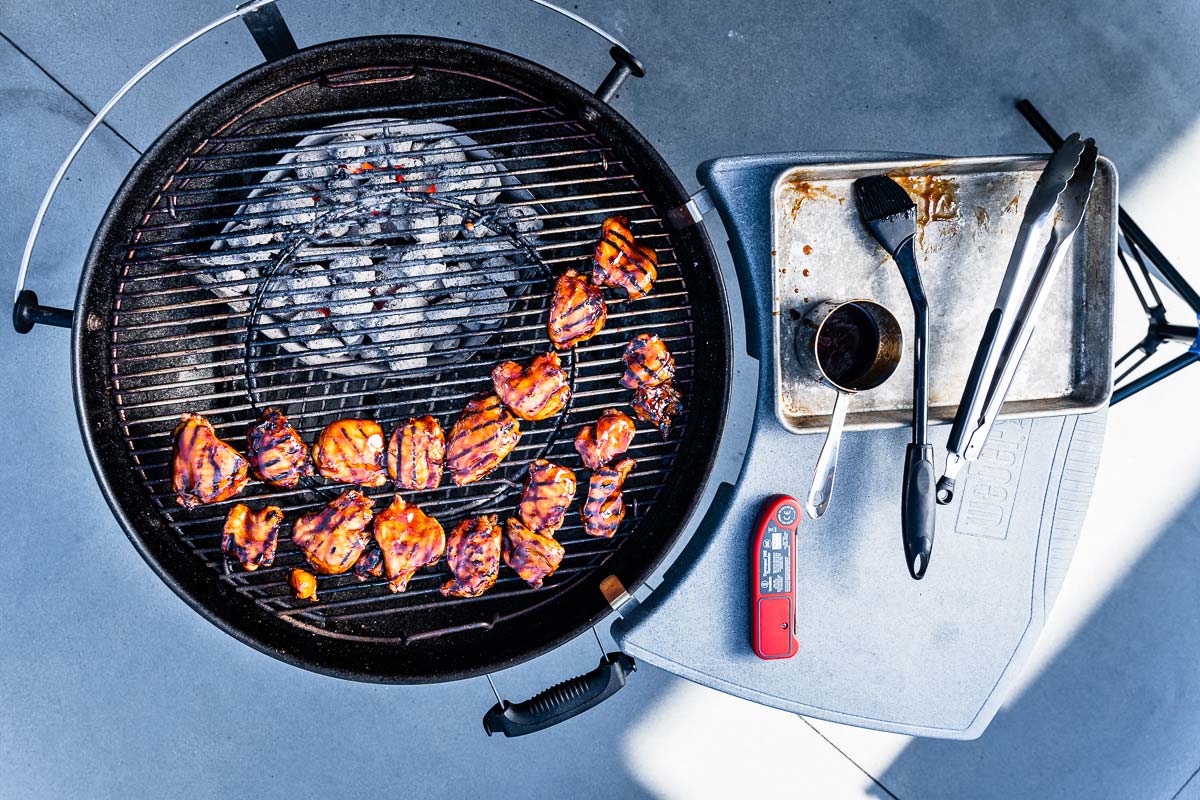 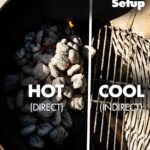 Two-zone grilling is the simple and essential grill setup you probably have been using all along in some form. It is key for perfectly cooking steaks, chicken, veggies and just about everything. It's easy enough, but allows you to really use all of your grill, and your cooking skills, to their full potential.

What Is Two-Zone Grilling?

Direct-heat grilling is placing the food directly over the heat source (charcoal for a charcoal grill or the gas burner for a gas grill). I call this the "hot zone," and it is where the food cooks quickly. It is used for searing, browning and cooking quickly. The heat source heats up the grill grates and also transfers heat directly to the food. This is similar to cooking in a skillet on the stove.

Depending on the specific grill, searing over direct heat can be done either with the grill lid open or closed.

Indirect-heat grilling is when the food is cooked near the heat source but not directly over it. I call this the "cool zone," which is actually still pretty hot, but much cooler than over the direct flame. Food cooks more slowly and evenly in the cool zone.

Cooking in the cooler zone is almost always done with the grill's lid closed to allow the hot air to circulate, acting like an oven.

The Importance of Indirect-Heat Cooking

Rather than just blasting everything with the highest possible heat, which might seem fun, we want to be a little more gentle and precise. If something cooks the entire time over high heat, the outside may be overcooked by the time the interior is cooked through, like when you see the gray ring around your steak. We want it perfect from edge to edge, which it will be if you use the hot side to develop a crust and then the cooler side to gently cook the interior.

If you are the type of griller who's been putting everything over the high heat the entire time, you will love the flexibility, control and results you get from the two-zone setup. The cooler indirect zone gives you a safe area, where you don't have to be so careful and attentive.

Uses for the Two-Zone Setup

From cooking thick-cut steaks to grilling chicken and veggies, to even baking beans, the two-zone setup gets the job done. It's usually a combination of both sides, rather than one or the other. The most common use for the two-zone setup is to first sear over direct heat to develop flavor, color and crust on the outside of the food, then transfer to the cooler side to finish cooking the inside perfectly.

The main advantage this gives you is control, even cooking from edge to edge. Having a cool zone prevents burning your food, reduces the chance of overcooking and is great for fatty foods as there is less of a chance of flare-ups from fat dripping into the flames.

Setting Up for Two-Zone Grilling

Two-Zone on a Charcoal Grill

Light your charcoal and when the coals are ready, distribute them on one side (half or a little less) of the grill or into charcoal separators, leaving the other side free of coals. Preheat for 10 to 15 minutes and you are ready to grill with a two-zone setup.

Two-Zone on a Gas Grill

The two-zone setup works great on gas grills with at least two burners. Turn on one (or half) of the burners and set to medium-high heat. Leave the other burners off and let the grill preheat for at least 15 minutes. You now have a two-zone setup.

Cooking with a Two-Zone Setup

And sometimes it's just the cool, indirect zone. Barbecue is pretty much always done with indirect heat. An example of this is smoking a primal cut like a brisket or a pork shoulder, cooking a whole chicken or a turkey, where it will be cooking long enough to crisp up and brown the skin (and render the fat) without having to be placed over the direct heat.

Each way has its advantages, and the one you utilize depends on what you are cooking and the results you are going for.

Tip: Use your grill's vents to help regulate temperature and direct the airflow.

The bottom line is a two-zone setup is a safer way to get better results.

The Importance of a Thermometer

As great as the food might look on the outside, you don't know for sure what it's like on the inside without the help of a trusted high-quality thermometer. There are so many variables that determine how long something actually takes to cook, that temperature is really the only way to know.

A Note About Kamado-Style Grills

I use a Big Green Egg all the time, but it or other Kamado-style grills (especially smaller ones) aren't great for the two-zone setup like other grills. The reason is that they are heavily insulated ceramic, so they are hot everywhere. And they have a smaller circumference so it is difficult to get enough separation between the hot and the cooler zones. Also, the coals are further from the cooking surface, so the direct heat isn't that direct.

TL;DR What You Need to Know

Two-zone grilling is the essential technique to properly cook your food completely without completely burning the outside.

Recipes that Use the Two-Zone Method

Want to learn more about...

Did you try this grilling technique?
I'd love to hear how it turned out!
Please leave a note and a rating in the comments section below, or tag @SaltPepperSkillet on Instagram.