Pure and simple melt in your mouth and packed with flavor beef brisket seasoned with salt & pepper then smoked low and slow with post oak and apple wood.
This post may contain affiliate links. Please read my Disclosure Policy.
Jump to Recipe 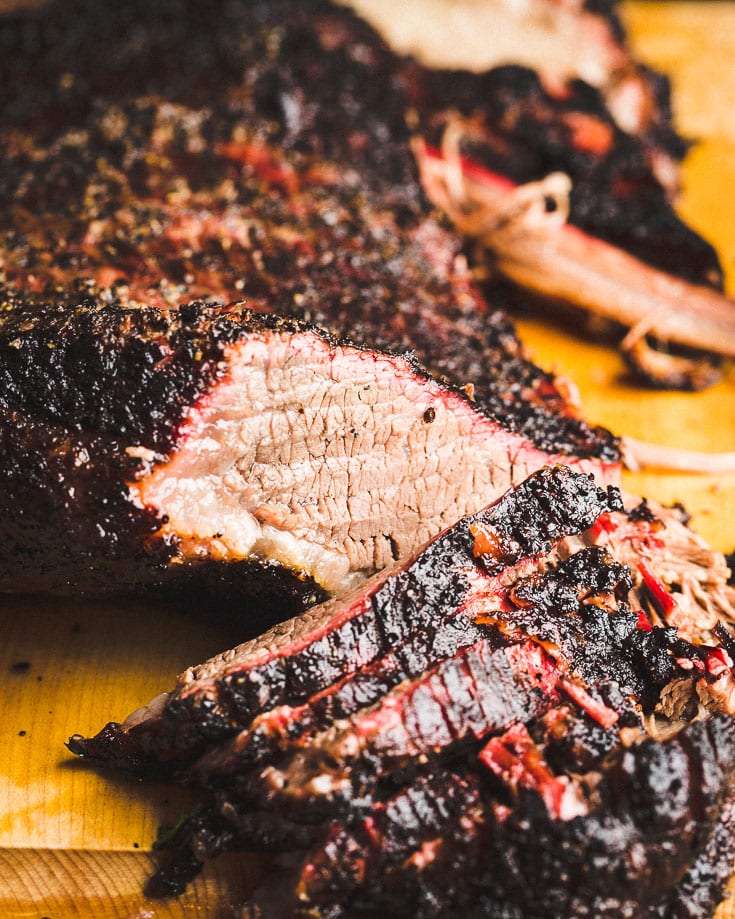 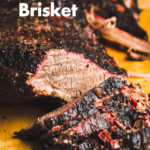 Smoking a brisket is an art. An art that seems super scientific and maybe impossible to master. So let’s change that and break it down to be something super simple that you can make today and have it be the best brisket you have ever tasted.

Being able to smoke a brisket is a skill that is looked up to by all who appreciate great barbecue. It’s like being a professor. Actually, the proper name for it would be “pit master.”

While we might never consider ourselves "pit masters," being able to cook a pit master quality smoked brisket is something I guarantee that you can do if you follow the formula.

We have a great Texas barbecue place really close by our neighborhood called Grand Ole BBQ y Asado. When you get within a few blocks, the smell from their trailer-sized smokers is unmistakable. They have some of the best barbecues in San Diego, and their brisket is top notch. As fun as it is going out to get great barbecue, there’s just something about putting in the labor yourself that makes it taste that much better.

The formula for perfect brisket: Making a perfect brisket doesn’t require any secret ingredients or technique. It’s really just the combination of 5 things. When one or two of them are slightly off, your brisket will still come out great, so don’t stress too much.

The keys to the best smoked brisket

Whether you are using a Traeger, a Big Green Egg, or a box smoker; it’s really the same concept. As long as you can maintain the proper temperature, deliver quality smoke and let your brisket rest for at least 1 hour; your brisket is going to come out great.

Feed a hungry crowd for less than $2 per person

Don’t calculate your hourly rate into this, but you can feed about 25 people with a 14-pound brisket. At $3.50 per pound, that is less than $2 per person for some of the best barbecue meat they will ever taste. Pretty amazing, right?
** a 14-pound brisket could also feed just 4 super hungry folks. 😛

What you are going to need to make the most amazing brisket.

Contains affiliate links where I will receive a commission if you make a purchase, at no extra cost to you.

What type of brisket meat is best for smoking?

I always recommend going with USDA Prime Grade brisket. It is usually only a few dollars more per pound, and totally worth it. The internal marbling is far superior to lower grades of beef. Marbling means more fat and more flavor and a much tastier and tender brisket.

If you can’t find Prime grade, then go with choice grade at a minimum.
If you are using pasture grass-raised beef, then your cooking time will be less because these cows are often leaner.

The basic steps for how to smoke a beef brisket

It’s always a good idea to pre-read a recipe before you even start. Here are the basic high-level steps to make the best smoked brisket. The full recipe is towards the bottom of this post.

It’s important to trim a lot of the excess fat from the brisket as it doesn't provide any benefit. There is plenty of fat marbled in the meat already. Trim the top fat side down leaving about ¼” of a fat layer. You also want to remove the silver skin (sinew), as it doesn’t break down and tenderize no matter how long it cooks. It’s really up to you as to how much time you want to spend trimming the brisket.

Smoking the flat vs the tip vs the whole brisket?

It’s usually possible to buy either just the flat or the tip from your butcher. Smoking anything less than the whole brisket just isn’t worth it with all the time you will be investing. There’s no reason not to smoke a whole brisket, and it will give you a variety of different meats between the flat and the tip muscles with different textures and fat contents.

How to season the brisket for smoking

We want to taste the beef and the smoke, so there's no need to cover that up with a strong rub or marinade.

You can totally go crazy with your favorite special rub if you want to. With this recipe, we’re keeping it super simple and only using an equal ratio of Kosher salt and freshly ground black pepper. After the brisket is trimmed and dried well, combine the Kosher salt and pepper in a small bowl or a spice rub shaker and evenly sprinkle it all over the brisket. For this smoke, we are seasoning the brisket one hour before cooking.

A 50/50 combination of Diamond Kosher salt and freshly ground black pepper. ½ cup of each is just about perfect for a 14 lb brisket. Any leftover seasoning can be used for seasoning the next thing you throw on the grill.

Wood for smoking often comes down to preference and can require experimenting to see the flavors you love best.

Type of wood: a combination of Post Oak and Apple Wood (affiliate).

Wood Size: For a long smoke like this one, use wood chunks which are much larger than chips and will last for hours instead of minutes so you don’t have to keep adding more.

How to tell when the smoked brisket is done

Always use a Thermapen instant-read probe thermometer (affiliate) to check the temperature, and even better is to use a Thermoworks Smoke Alarm (affiliate) so you can monitor it wirelessly without having to open the smoker.

This means it’s finished cooking, but it’s not ready to slice in to and eat. It still needs to rest for at least one hour and preferably two hours before slicing.

Tips for smoking the brisket

Fat side up or fat side down?

The myth that fat side up will allow the fat to run through the meat has been busted numerous times. It just doesn’t work that way. I recommend placing the fat side closest to the heat source, which will protect the meat from drying out as well as make for the best bark.

How long to smoke a brisket

It's really about the finished temperature more than it is about the clock when it comes to the perfect results. There are lots of variables including the temperature of your smoker, the thickness of the meat, fat content, etc.

Smoking meat always seems to take longer than you plan for, so start early and just let it rest longer.

The stall is a real

The stall when smoking meat happens after two or three hours when the internal temperature reaches around 150 degrees. It can stay at this temperature for up to four hours. The stall is real, and it can really mess with you. It messes with me every single time. You just have to know it’s going to happen and trust that yes, the temperature will rise again and it will rise fairly quickly once it starts.

How long to rest the brisket

Rest the brisket for 1 to 2 hours in a cooler (still wrapped in the butcher paper). You can also wrap it in another layer of aluminum foil and a few towels to keep it extra insulated. It might be tempting to rest it for less time, but it’s totally worth waiting. This gives all of the juices time to fully redistribute and will result in juicier and more flavorful meat.

How to slice a brisket

After the brisket has fully rested, of course you can’t wait to start eating.

What to serve with smoked brisket

Serve it with bread, butter pickles quick pickled onions. Bright sides that will contrast with the smoky flavorful meat with nothing too fatty or rich will be a great side. A fresh coleslaw is perfect because you can eat it on the side or put it on a brisket sandwich if you prefer.

Funny thing that I found out with this brisket. If you put the entire smoked brisket out on a cutting board, a crowd flocks and starts slicing little pieces and nibbling their way through the evening. This continues to happen as long as the brisket is out. This could take the place of a cheese board.

Do you need bbq sauce with brisket?

The quick answer is NO! sauce isn’t needed for something this rich and flavorful. It speaks for itself. If you need bbq sauce on your brisket, then chances are something went wrong when cooking it. This brisket should melt in your mouth with so much amazing flavor that you definitely don’t want to cover it up. But if you must, a little sauce can be added or on the side to dip in.

So you smoked a whole brisket. Chances are there will be at least a little leftover (or at least I hope so for your sake). The good news is that there are so many things you can make with the leftover smoked brisket.

The two things that I'm going to highly recommend that you make are brisket sandwiches and omg good brisket ragu over pasta. For the sandwiches; I will usually slice off pieces of the flat, microwave them for 30 seconds or so just so they are slightly warm, and put them on white bread with just a little sauce. Making a ragu with this brisket is just insane. I don't have a recipe up here for it, but I followed similar steps to this bolognese sauce. It came out pretty much amazing.

Ok, you get the point. It is good in just about anything and you are the lucky one who gets to indulge for hopefully a few days at the least.

What to drink with smoked brisket

It’s going to be a long and wonderful day smoking this brisket, so you need to stay hydrated and happy. Along with drinking plenty of water, a light session beer during the day does the trick. When it gets closer to eating time; switch over to a smoky cocktail when it’s time to eat.

Mezcal Sour and the Hot and Smoky Mezcal Margarita are a great pairing.

View all BBQ and Grilling Recipes 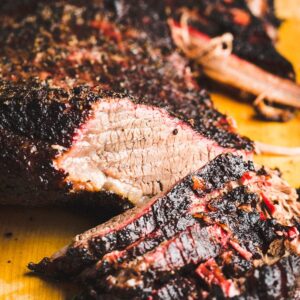 As an Amazon Associate, I earn from qualifying purchases.
© 2021 Salt Pepper Skillet LLC